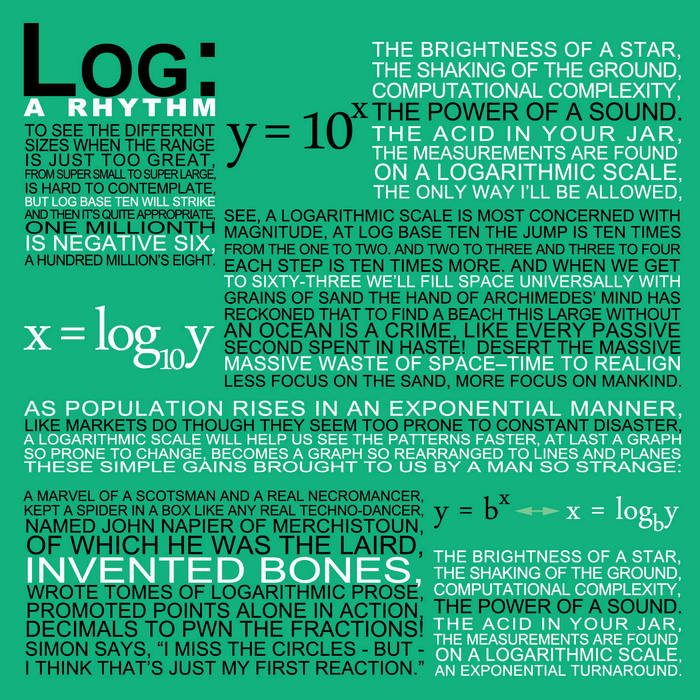 The brightness of a star,
The shaking of the ground,
Computational complexity,
The power of a sound.

The acid in your jar,
The measurements are found
On a logarithmic scale,
The only way I’ll be allowed,

To see the different sizes when the range is just too great,
From super small to super large, is hard to contemplate,
But log base ten will strike and then it’s quite appropriate,
One millionth is negative six, a hundred million’s eight.

See, a logarithmic scale is most concerned with magnitude,
at log base ten the jump is ten times from the one to two.
And two to three and three to four each step is ten times more.
And when we get to sixty-three we’ll fill space universally
with grains of sand the hand of Archimedes’ mind has reckoned
that to find a beach this large without an ocean is a crime,
like every passive second spent in haste!
Desert the massive massive waste of space– time to realign
less focus on the sand, more focus on mankind.

As population rises in an exponential manner,
Like markets do though they seem too prone to constant disaster,
A logarithmic scale will help us see the patterns faster,
at last a graph so prone to change, becomes a graph so rearranged
to lines and planes these simple gains brought to us by a man so strange:

A marvel of a Scotsman and a real necromancer,
kept a spider in a box like any real techno-dancer.

Named John Napier of Merchistoun, of which he was the laird.
Invented bones. wrote tomes of logarithmic prose.
Promoted points alone in action, Decimals to pwn the fractions!
Simon says, “I miss the circles - but - I think that’s just my first reaction.”

The brightness of a star,
The shaking of the ground,
Computational complexity,
The power of a sound.

The acid in your jar,
The measurements are found
On a logarithmic scale,
An exponential turnaround.

from icanhasmatheatre! The Archive., released August 28, 2014

Bandcamp Daily  your guide to the world of Bandcamp

Featured sounds by K.Spark and WIZDUMB, plus Basi joins the show to discuss his latest release.