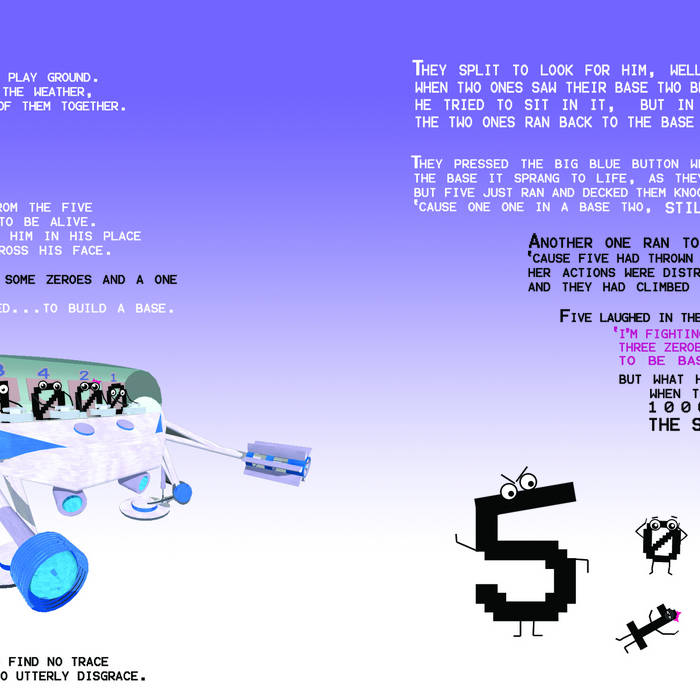 Four ones were being bullied around,
By a mean Five who hung out at
The same play ground.
The four ones were scared
for no matter the weather,
Oh, the Five was very big,
More than all of them together.
Oh four ones, there’s gotta be a way,
to beat a wicked Five at his dirty game
the situations pretty grim,
but there’re four of you,
and one of him.
One day our four heroes
were hiding from the Five.
When they met four Zeroes,
Just glad to be alive.
Together they knew
that they could put him in his place.
When one of the zeroes
got a smile across his face.
His dad had told him this once:
“All you need’s a little space,
For some zeroes and a one
to make a number to amaze.”
So the eight of them united
and decided...to build a base.
They worked out,
If - they built a base ten,
They‘d be over a million!
But that seemed a bit beyond them.
So after careful research planning and review,
they began to build a small base two.
For three Tuesdays, the ones and zeroes stayed up late.
Their base had four seats numbered:
One, two, four and eight.
And so the time had come,
but they could find no trace.
Of that bully five whom they
had plans to utterly disgrace.
They split to look for him,
imagine their surprise,
When two ones saw their base two
bein’ accosted by the Five.
He tried to sit in it,
but in base two Five don’t fit.
The two ones ran back to the base
and in its seats did sit.
They pressed the big blue button
which was labeled activate,
The base it sprang to life,
as they stepped up to the plate,
But five just ran and decked them
knocking ones and the base free
Cause one and one in a base two
still only act as three.
Another one ran to the base
but never made it there,
Cause Five had thrown her
to the ground but she was still aware,
Her actions were distractions,
Now her friends had all arrived,
And they had climbed into the base
to finally challenge five!
Five laughed in their collective face,
“I’m fighting with halfwits!
Three Zeroes and a One,
About to be bashed into bits!”
But what he didn’t realize,
when they hit Activate,
1 0 0 0 in base two’s the same as eight.
Not much more to say,
but that five got it in the face,
He woke up ten times weaker,
feeling somewhat out of place,
He vowed that he’d get even,
at least until he had spied,
The decimal point that the ones
affixed to his left side.

from icanhasmatheatre! The Archive., released August 28, 2014

Bandcamp Daily  your guide to the world of Bandcamp

Featured sounds by K.Spark and WIZDUMB, plus Basi joins the show to discuss his latest release.